What is iOS App Development?

iOS development is the process of creating applications for Apple’s mobile operating system—the operating system used by the iPhone and iPod Touch. In this most fundamental sense, it has a lot in common with other types of software or app development, but there are a few key differences.

One of the things that distinguishes mobile app development from most other software is that, because apps are designed to run on mobile devices with more limited power, they rely on a network connection to take advantage of remote computing resources. To give one example: there are translation programs you can load onto a desktop computer and run locally, including their massive databases. By contrast, in a translation program written for iOS or another mobile platform, the installable software bundle—the app that lives on our phone—exists primarily to create a touchpoint for the user to interface with; the app sends a query to a remote platform that performs the actual translation, and the result is relayed back to the app for the user to read.

This client–server model allows the app to take up much less of a device’s memory and offer a more streamlined installation and operating experience, but adds a layer of complexity as compared to software that runs locally—now, the app is required to communicate with a network of remote actors. Not all iOS apps require a mobile connection to function (you can typically use a sketchpad app without connecting to a network first, for example), but all mobile apps need a connection to install and update, an issue the iOS Developer has to take into consideration.

Today, the smartphone OS market is dominated by two major players—Google’s Android and Apple’s iOS. While Android is open-source, iOS is used exclusively on Apple hardware. This results in another major difference between iOS development and the development of other types of software: iOS Developers rely on two programming languages, Swift and Objective-C, which are seldom used outside the Apple ecosystem. While Objective-C can trace its lineage back to the early 80s, and is part of the same family of languages as C and C++, Swift was developed by Apple specifically for iOS, and is a more recent invention, first released in 2014.

Creating an iOS app involves many steps; exactly which steps an iOS Developer works on will depend largely on their level of seniority, the size of their company, and the scope of the app itself. A Senior iOS Developer, for example, is much more likely to be involved in the initial research and conceptualization phases, while a Junior iOS Developer working in a large firm might have a list of responsibilities limited to just one or two phases, or contribute to a single feature within a single phase.

Of course, it’s also quite possible to develop an app single-handedly, in which case an iOS Developer would oversee all of the following steps themselves. That being said, the development of an iOS product typically involves the following stages.

Obviously, the first step in creating an app is to think of an idea. What’s your app going to do, and how? Closely tied to this is competitive market research—looking into how much demand there is for your idea and what competition you might face. Once you’re satisfied that you’ve come up with an original idea for an app that people will want to use, it still remains to ensure that it will conform to Apple’s terms of service, which stipulate an app’s requirements for user privacy and security, design, copyright, decency, and so on. If your app runs afoul of Apple’s guidelines, you won’t be able to distribute it.

While much of the way your app operates will flow from the concept itself, the design stage is where all the details are determined. This typically begins with a wireframe, which models how users will navigate through the app and its functions, accounting for all the different possible interactions and how they’ll play out. That leads directly to the UI and UX design phase, which establishes the specifics of page layout, organization and appearance, user interaction points and how those interactions unfold, and even the finer details of typography, icons, and graphic design. Also part of the design phase is setting out the software’s architecture—which is invisible to the user but crucial to determining the internal structure of the software’s systems.

Here’s where the coding comes in. Putting together the app involves three separate facets that need to be combined into a single functioning whole. The first of these is the back end, which is essentially everything that happens server-side; this is where most of the app’s heavy lifting happens, including account authentication and management, notifications, and the app’s integration with third-party services like social media, not to mention most of the processing and maintenance that keep the app running. Second is the Application Programming Interface, or API, which effectively translates what’s happening on the server side into something a user’s mobile device can understand. And finally, there’s the front end, which comprises everything the user interacts with directly. There are iOS Developers who do all three, and there are also those who specialize in front-end or back-end development only.

Once the app is assembled, testing ensures that it actually works. This determination isn’t as simple as “functional” or “non-functional”; it’s also a big part of the UI / UX design process mentioned above. In this penultimate phase, giving the app to actual users to try out is an opportunity to fine-tune details and make things clearer, more organized, or more beautiful, as well as to fix bugs. Once the app is performing its best, it’s submitted to the App Store—and, assuming it’s approved, finally made available to the public.

It then remains to market the app (probably not the iOS Developer’s job)—and to field user feedback and continue to make adjustments, improvements, and bug fixes in response to that feedback. A Developer may ship an app, but it’s never really done; even a perfect app (if there is such a thing!) requires periodic updates to keep up with changes to iOS itself.

Our Managed IT services will help you succeed. Let’s get started

iOS App Development Platform In Which We Deals

Complete eCommerce Solution for your business.

Learning Management System for your school/college/institute.

We Developed all types of Food Delivered App, Like :- Zomato, Swiggy ,Uber Etc. 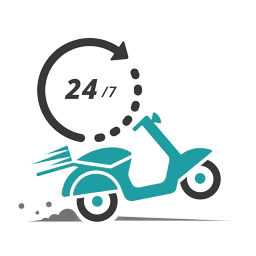 We Also Build On Demanding or Requirement Based App.

Stop wasting time and money on technology. Let’s get started

Are you ready for a better, more productive business?

Stop worrying about technology problems. Focus on your business.
Let us provide the support you deserve.